Stay Here Move According To Region
Skip to content

RealSAM Pocket takes away the stress of figuring out complicated phone interfaces when you can’t see or can’t see well enough what’s on the screen. It enables you to communicate with your dear ones by phone or text, reduces isolation by allowing you to stream content and supports your independence with handy assistance tools… all this by just using your voice. No need to learn complicated touch screens or struggle with reading small buttons; just tap the screen and talk. It’s that simple! 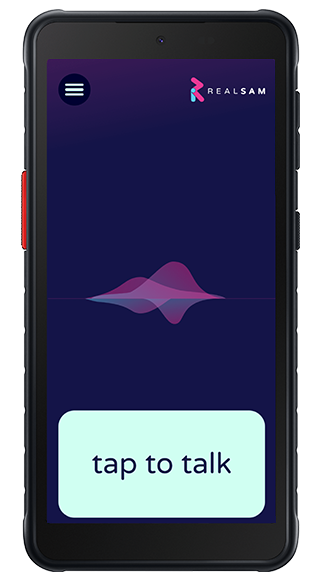 Our partners have worked with us to deliver our innovative and life-changing products. Their continued support has been vital to our success.

With RealSAM Pocket You Can:

Our price plans start at £25.99 per month, including unlimited Customer Support & a no quibble 60-day return period!

Shop
Request a Call Back

What's in the box?

Everything is setup and activated, so it works straight out of the box!

A lanyard to keep it safe and always at hand.

A charging plug and USB cable.

What's in the box?

Everything is setup. All you need is to insert a SIM card or connect your RealSAM Pocket to WiFi.

A bumper case with a lanyard and a screen protector attached to the screen to keep your phone safe and always at hand.

A small tool you'll need to open the slot and insert a SIM card from your preferred provider.

Stream thousands of talking books, newspapers and magazines, radio or  podcasts at no extra cost.

Tap the screen and ask for what you want using natural speech.

Try it for up to 60 days without pressure and enjoy unlimited customer support.

We have proudly partnered with the RNIB and O2 since 2018 to develop RealSAM Pocket. Find out more: Play Video
“I have spoiled some of my husband’s stories, because now I get the same articles that he reads in the newspapers”
Janene S
“The single button and voice controls are impressive and simple to use”
Graeme I
“Thank you for all of your help. I am certain this is going to change my life!”
Judy H

We are regularly asked a lot of the same questions, we have listed these below to help with any queries you have. 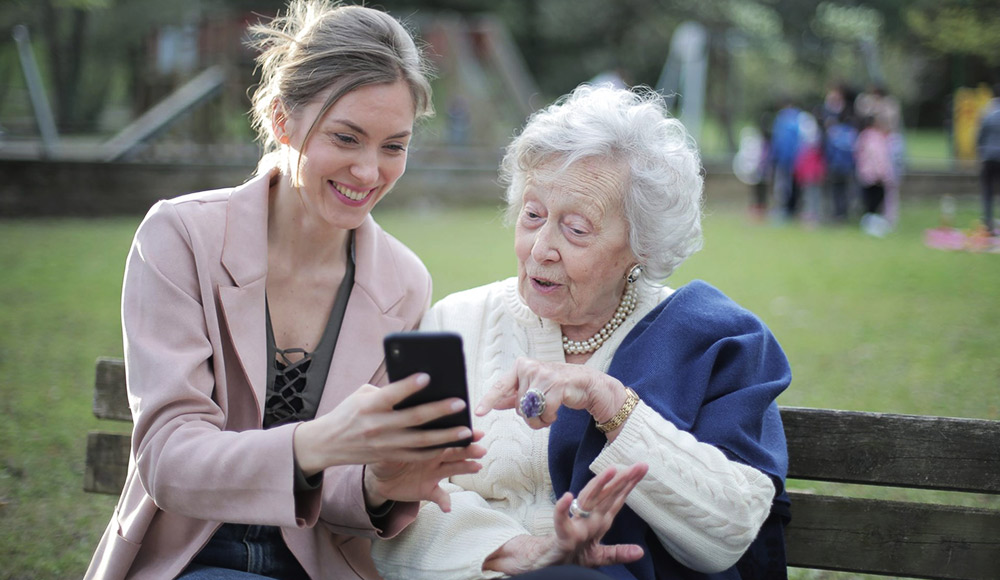 RealSAM Pocket is a voice controlled smart device that is designed to be simple to use and of enormous value to people living with low vision and blindness.

We install our software on a Samsung mobile phone, and it completely takes over the phone. More than just a phone for the blind, you can use your voice to make phones calls, search for and stream audio books, read today’s newspapers, get navigation or sighted assistance and much, much more.

What are the parts of RealSAM Pocket?

RealSAM Pocket is actually a collection of smart technologies. It is:

The handset that controls basic functions such as speech to text conversion, media playing and making calls. It runs on an Android phone, but the user can’t access Android directly.

A network connection via Wifi or a mobile service provider.

An Artificial Intelligence engine on the internet that figures out what users want and responds.

A variety of sources of content on the internet such as the RNIB Talking Books library.

A web portal that allows users, family, friends and care takers to update some parts of the device.

Why isn’t Pocket an App?

Our customers often tell us that they find downloading and using apps one of their main frustrations. By ensuring all of our services are built in to Pocket, we offer a consistent and easy customer experience.

Why can’t you put RealSAM Pocket on my phone?

We probably could, but it wouldn’t be viable for you as it generally takes us a minimum of two to four weeks work to get Pocket working seamlessly on a new phone.  It would be expensive!

Should I wait for the next version?

All users get all the updates, so no one ever misses out on features. Also we only change handsets every couple of years because we can’t purchase the old handset anymore. So there’s no need to wait when you can start using it right away.

Request a Call Back

RealSAM and other companies we work with use cookies on our website to improve your experience, for analytics and to deliver personalised advertising on this and other websites. By clicking “Accept”, you consent to the use of ALL cookies. Visit Cookie settings to change your settings at any time. For full details of how we use your personal information read our Privacy Policy.
Cookie settingsACCEPT
Manage consent

RealSAM and other companies we work with use cookies on our website to improve your experience, for analytics and to deliver personalised advertising on this and other websites. Out of these, the cookies that are categorised as necessary are stored on your browser as they are essential for the working of basic functionalities of the website. We also use third-party cookies that help us analyse and understand how you use this website. These cookies will be stored in your browser only with your consent. You also have the option to opt-out of these cookies. But opting out of some of these cookies may affect your browsing experience.

For more information on how we use cookies visit our Cookie Policy. More information on how our partners use cookies is available from Google or Facebook.
Necessary Always Enabled
Necessary cookies are absolutely essential for the website to function properly. These cookies ensure basic functionalities and security features of the website, anonymously.
Others
Other uncategorised cookies are those that are being analysed and have not been classified into a category as yet.
Advertisement
Advertisement cookies are used to provide visitors with relevant ads and marketing campaigns. These cookies will collect data to track visitors across our websites and third parties for ad personalisation and measurement.
Performance
Performance cookies are used to understand and analyse the key performance indexes of the website which helps in delivering a better user experience for the visitors.
Analytics
Analytical cookies are used to understand how visitors interact with the website. These cookies help provide information on metrics the number of visitors, bounce rate, traffic source, etc.
Save & Accept
Powered by