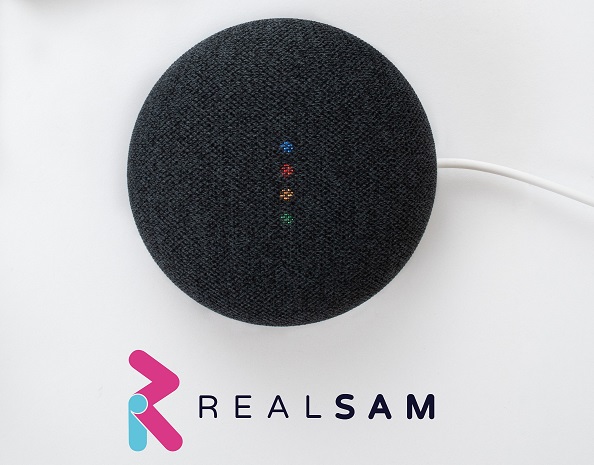 In this week’s blog, Red shares his experience of getting to grips with the new RealSAM smart speaker service. As a self confessed ”technophobe”, he’s put our sign up processes to the test!

A few months ago, if you’d told me that I would be happily using cutting edge technology, and writing articles about it, I would have laughed and said, ‘in my dreams!’! But such is the transformation that the arrival of Pocket has made to my life. Its simple to use voice commands have revolutionised the way I enjoy my audiobooks, podcasts and radio stations and reintroduced me to the joy of newspapers and magazines. But more importantly it has made me feel more included in our increasingly digital world. The change has even been noticed by my colleagues at RNIB Connect Radio, where in meetings I feel, and act, far less like the analogue dinosaur I used to be.

So, when RealSam asked me whether I would like to test drive a new Google Home device for them I leapt at the chance.

As with my Pocket, my Google Home speaker was delivered promptly; and on the same day I received an email from RealSam giving me basic set-up instructions, some guidelines on getting started), and an assurance that the RealSam Technical Support Team was only a phone call away if I needed help.

I excitedly unpacked the box to find the device, which is fundamentally a large smartphone attached to a wedge-shaped mesh-metal speaker, and a power cable. It is compact, feels well-constructed, and, when I plugged it in and it booted up, the speaker had a nice tone and a decent volume range that’s easy to adjust using a tactile up and down rocker switch located at the back of the screen on the right-hand side.

There is also a speaker on-and-off slider button, again on the backside of the screen, at the top, in the middle. This is a very welcome feature if you don’t want Google listening to you all the time but prefer not to switch the device off fully at the mains.

If like me, you are blind and have no useful vision you will probably be best off asking a sighted friend or family member to help you get set up. and I advise you find a time when you’ve both got about 45 minutes to spare. As yet the device has no in-built screen reader, and though it is possible to navigate via your Android or iPhone using the Google Home appp, I would have struggled with some of the steps. So, I sat down with one of my daughters instead.

The first step was to download the Google Home app onto my phone and to link both devices to a Gmail account. Fortunately, I already had one and once I’d been verified, we were in.

Next, we tapped on ‘Device Set Up’ and the app found my Google Home speaker straightaway. The speaker played a musical note and said, ‘Did You Hear the Google sound?’ I replied ‘Yes’ and after tapping the ‘Add Device’ icon, we began exploring the settings.

First, we connected it to the house Wi-Fi, before going through the privacy settings. These included opting not to share all my personal data; and selecting ‘Match Voice’ so the speaker will only respond to my commands. I then had to go through a series of recordings of my voice (mostly just saying ‘Hey Google’) which I would have found impossible to complete without a sighted helper, but maybe that’s because I was using an iPhone.

There were several other options but at last we tapped ‘Verify’, were sent a code that we needed to type into the app and after tapping ‘Next’ and installing the latest update, my Google Home speaker began to speak to me.

The last step was to activate my RealSam account. I did this by saying ‘Hey Google, talk to RealSam’, which is the key phrase to remember to access the majority of services that I have come to love and rely on through my Pocket. I was then prompted to speak the  five word activation code that RealSam had emailed me, and hurrah, I was back in the RealSam sweetshop!

Like all the set-up steps above, this activation code is a one-off and, if it felt like a bit of a palaver at the time, two days later as I write this with my favourite radio station playing through my new Google Hone speaker and the prospect of listening to another few chapters of ‘Murder in Mesopotamia’ when I’ve finished, it seems a small price to have paid for a lot of entertainment to come.