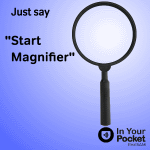 In the next few days you will receive an update for your In Your Pocket, where we have added an amazing brand new feature for people with low vision, a video magnifier.

Having a magnifier installed on your Pocket means you don’t need to buy or use a separate device. Magnifier has the incredibly useful ability to capture an image, change its colour scheme, and zoom in and out. For example, you could use it to capture the small printing on the back of a can, change the colour scheme to blue and yellow, then zoom in to see what the words say.

To start the feature, just say ”Start Magnifier”. To exit out, press the talk button.

The controls of the magnifier are touch screen with voice feedback. You run your finger over the screen to have the feature announced, then release your finger to select that feature. It works in the same way as the touch screen menu works.

On the screen at the centre bottom you will find the button to capture an image, with zoom in and out buttons on either side. Just tap anywhere on the screen to focus.

Capturing an image will bring up a menu button on the top left corner, which creates a drop down list of viewing options such as, increase contrast, black and white, blue and yellow, etc.

Just say “Start Magnifier” and try it out once you have received the update.

We hope you will enjoy this feature. If you would like more information please ring 333 772 77080 or email helpline@inyourpocket.net

From the In Your Pocket team – Advanced Technology for people with sight loss.